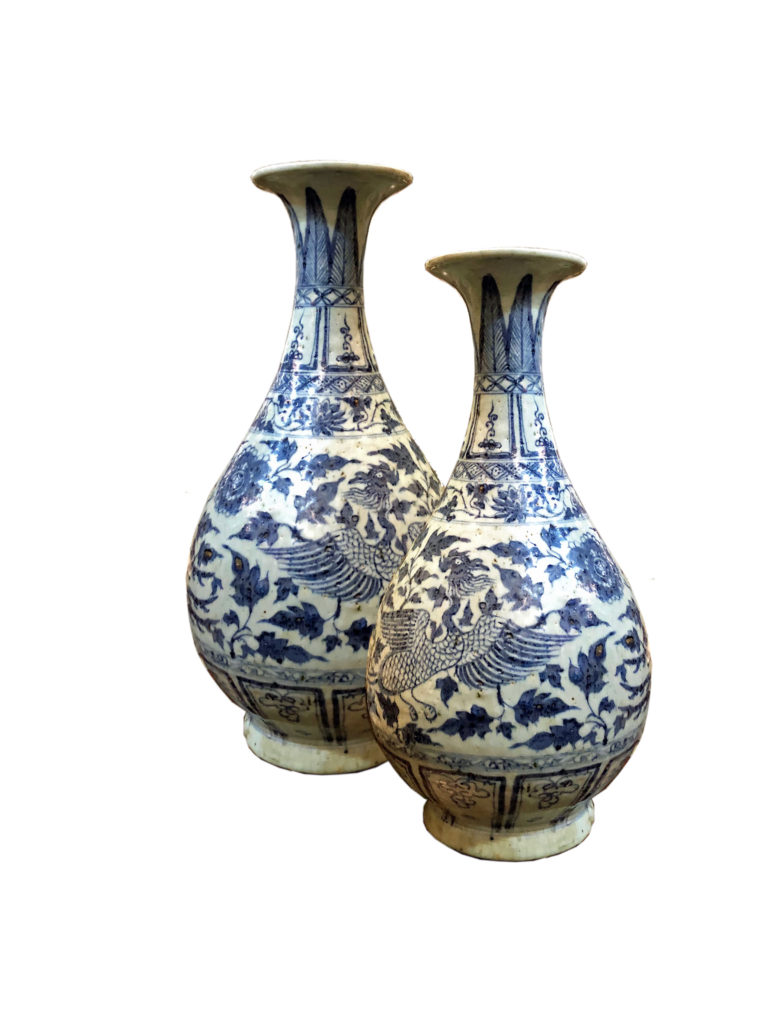 A Pair of Chinese Export Blue and White Porcelain Vases 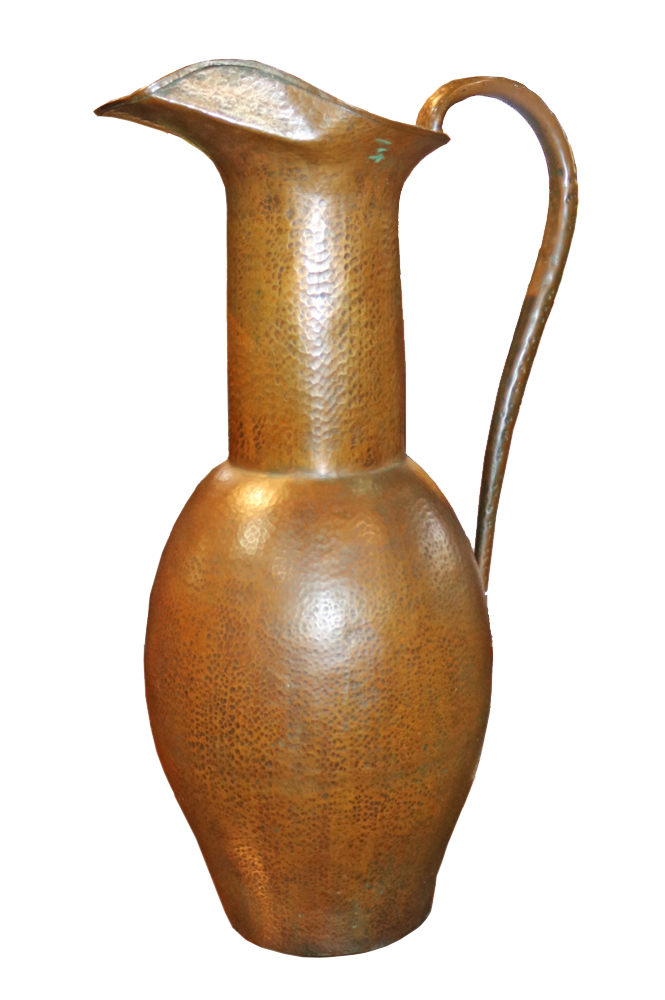 A Late 19th Century Italian Copper Ewer, with a hammered patinated surface and a tall neck terminating in an everted mouth and with a single curvilinear handle 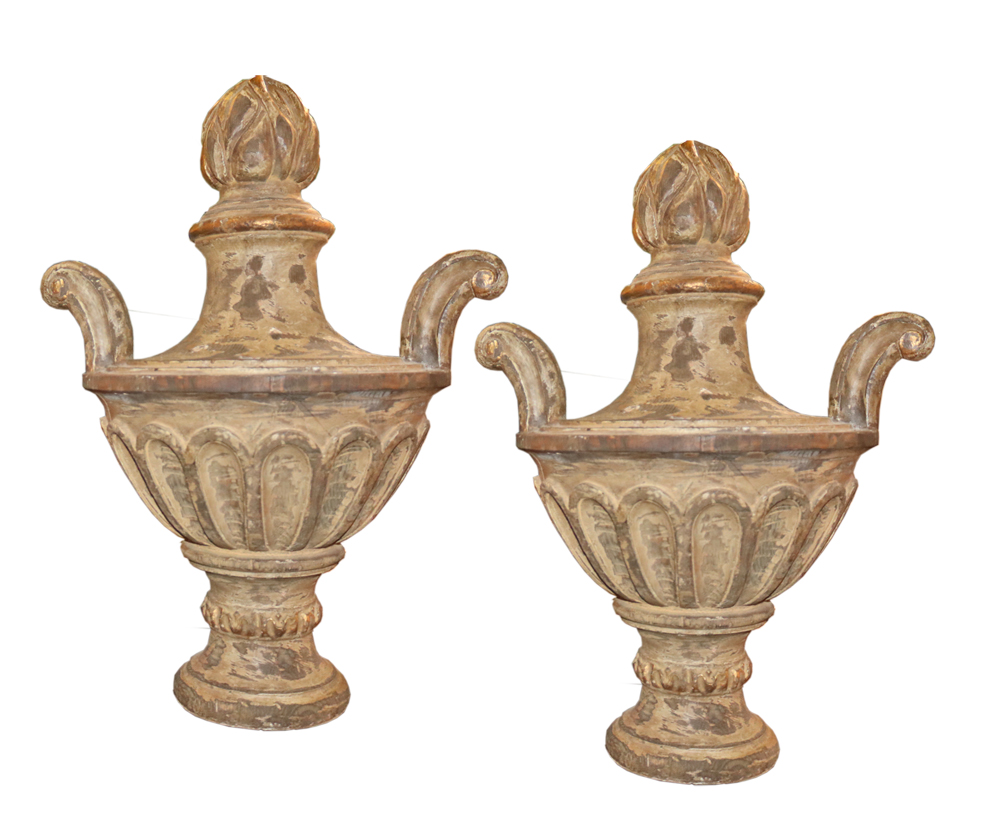 A Pair of 19th Century Italian Polychrome Urns, carved by hand with original cream finish, each with two curvilinear handles and set upon circular bases

A 20th Century Hammered Copper Amphora, in the American Arts and Crafts Style, the patinated amphora comprised of a long neck flanked by two angular handles above a circular base 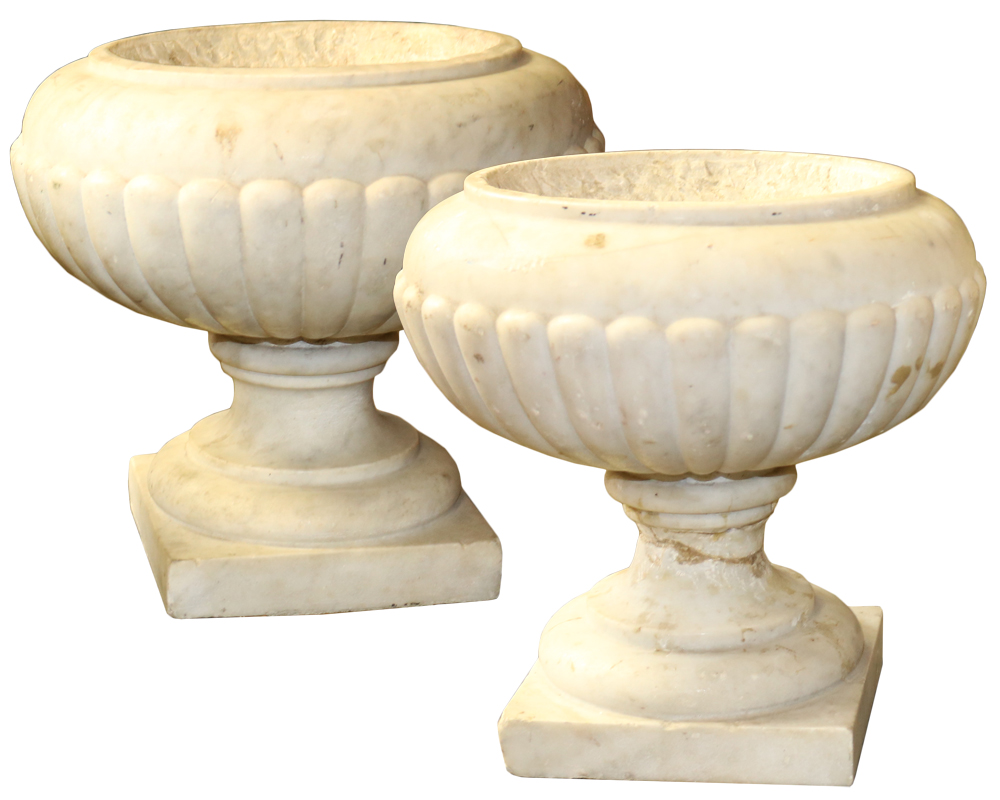 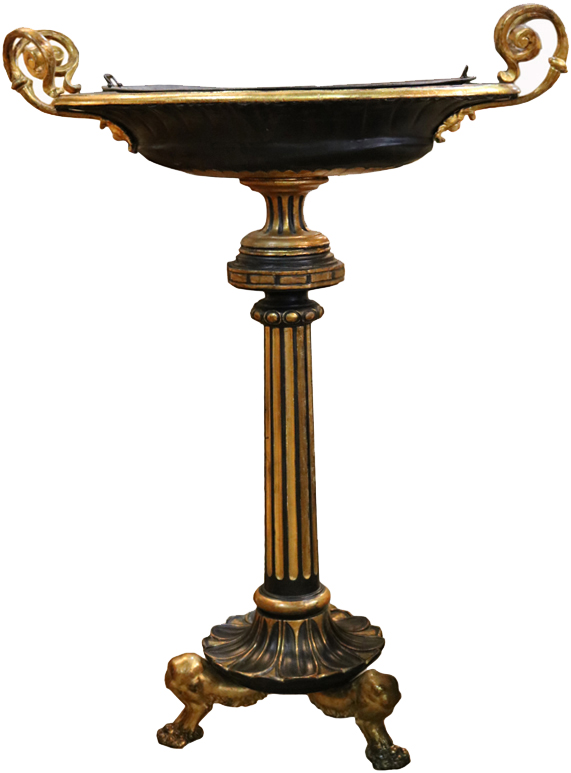 A 19th Century Italian Empire Parcel-Gilt Polychrome Jardinière (planter), oblong in shape and supported by a matching stand with a central fluted column rising from a tripartite paw-legged base 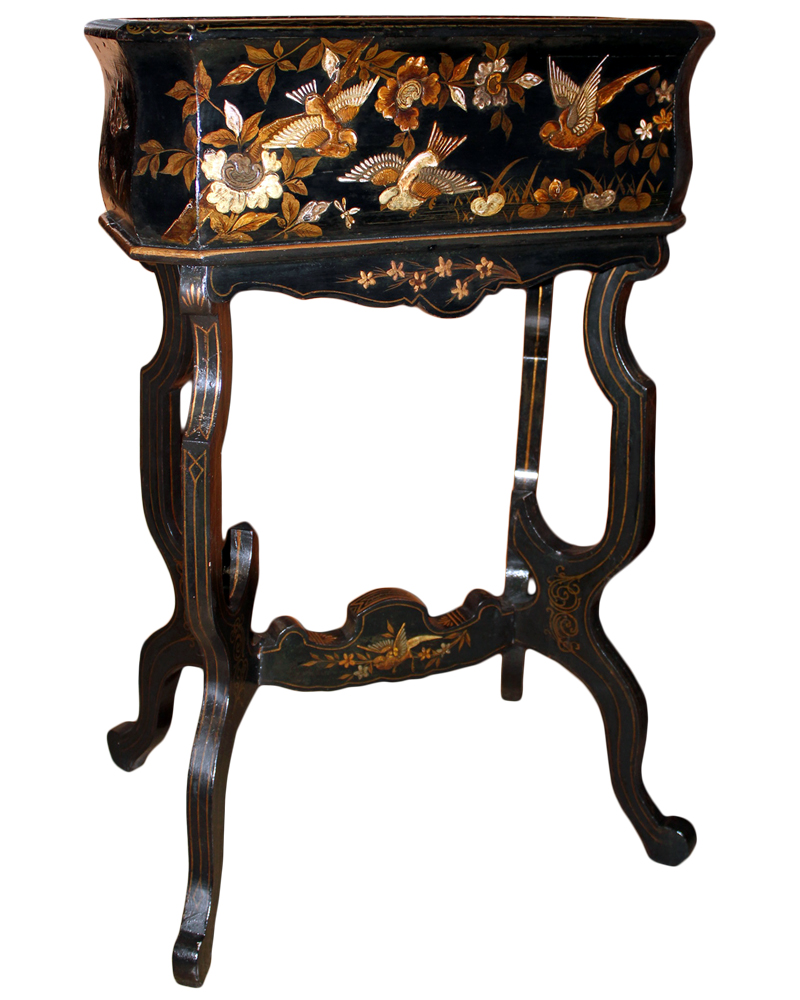 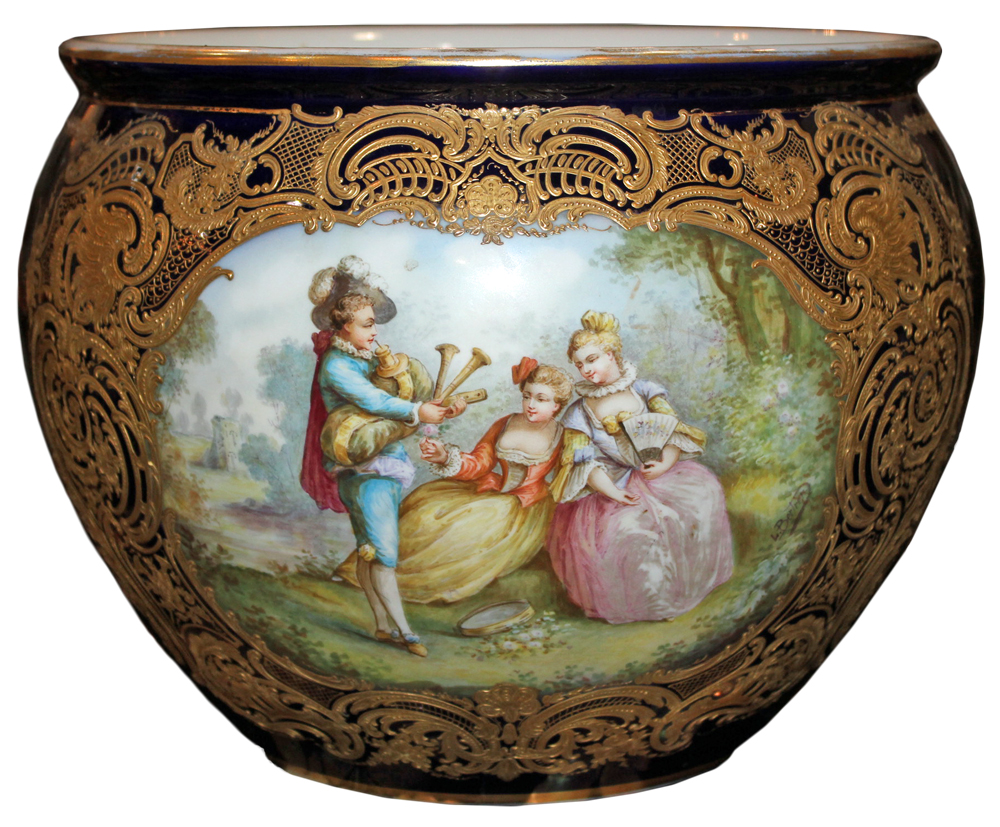 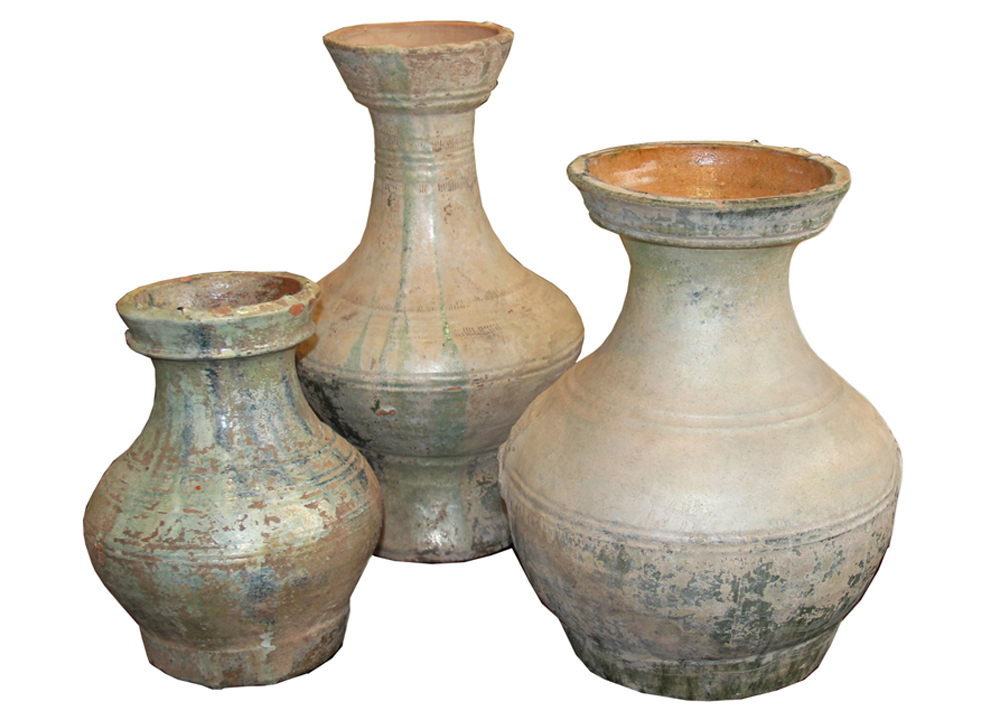 A Set of Three Han Dynasty Glazed Earthenware Jars, of ovoid and waisted form, with shaped mouths and hints of silvering, glazed in varying tones of sea foam green, and accented with incised denticulation and geometric forms, used for storing wine and oils, available individually 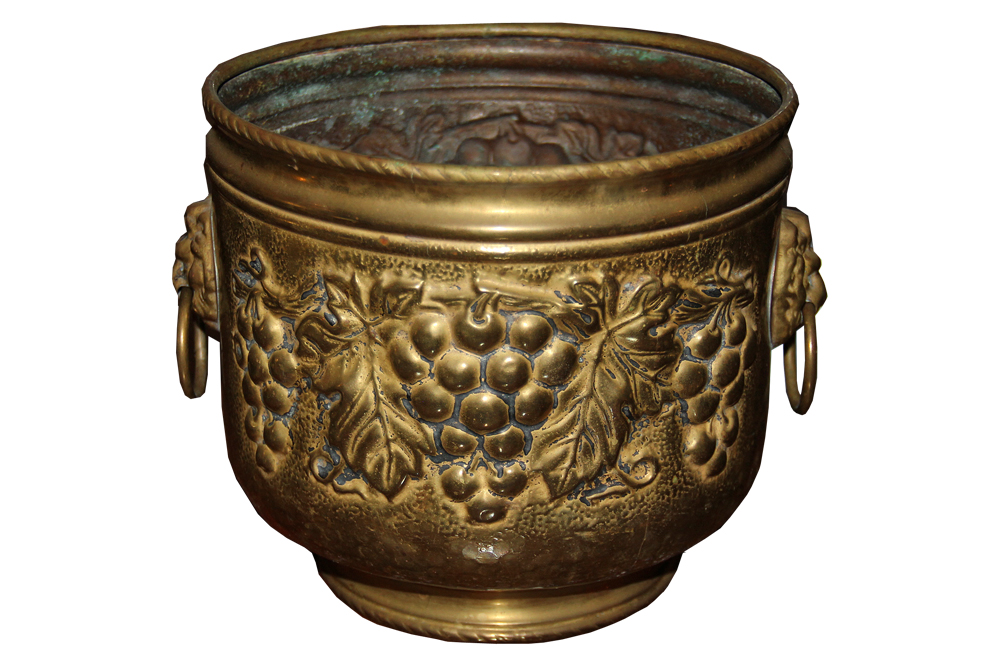 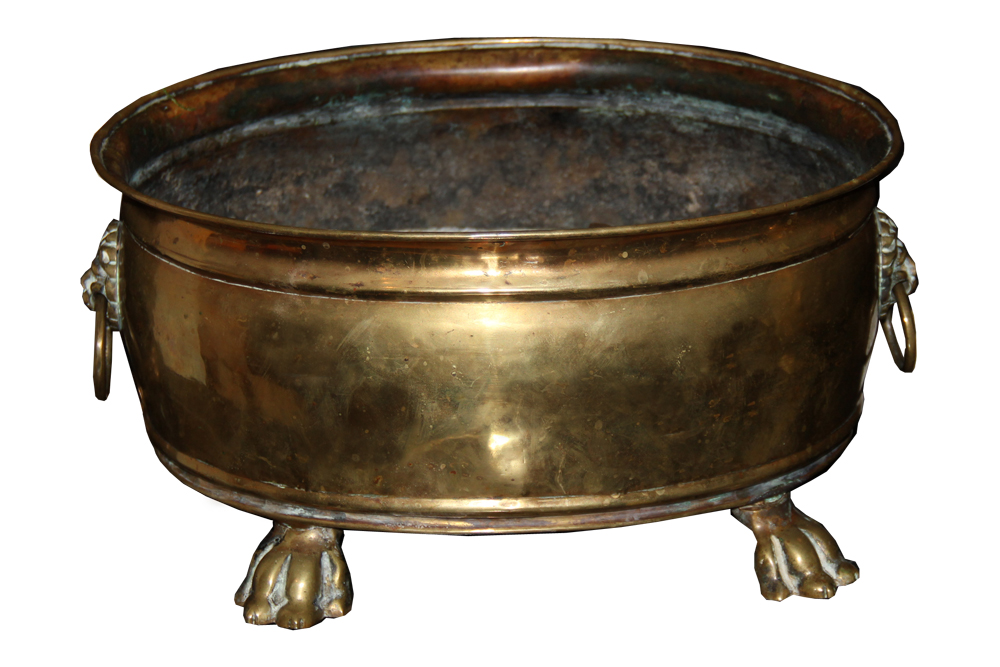 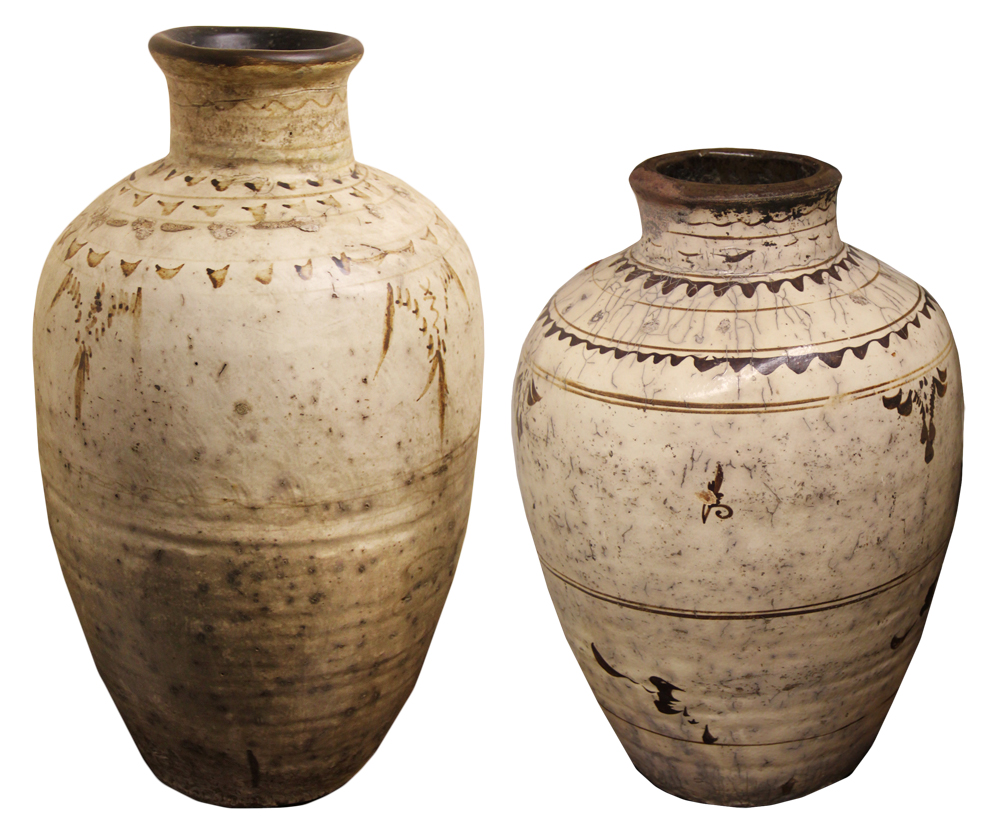 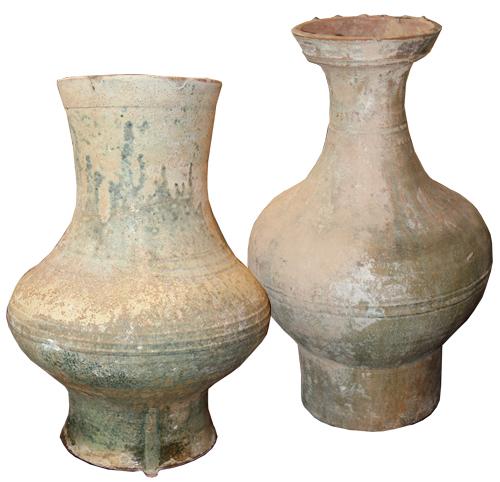 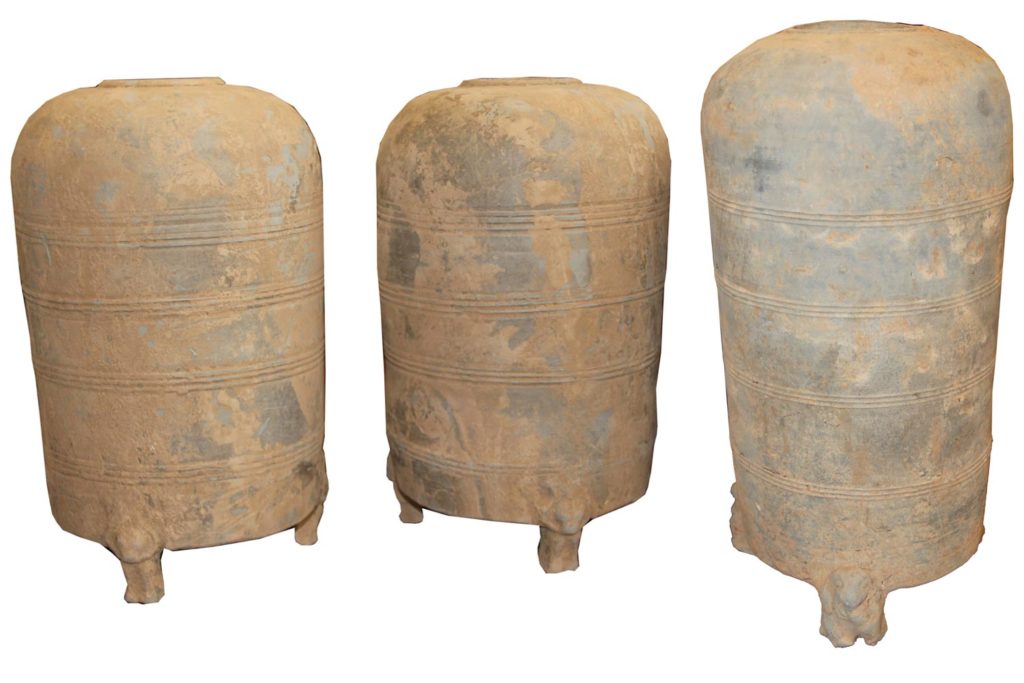 A Collection of Three Chinese Han Dynasty Earthenware Jars, including three cocoon jars painted in white, the shape of the jar was meant to represent the silk worm’s cocoon, a symbol of wealth and luck, as silk was a large economic contributor to China during this period, decorated with incised bands, above tripod feet, Available Individually 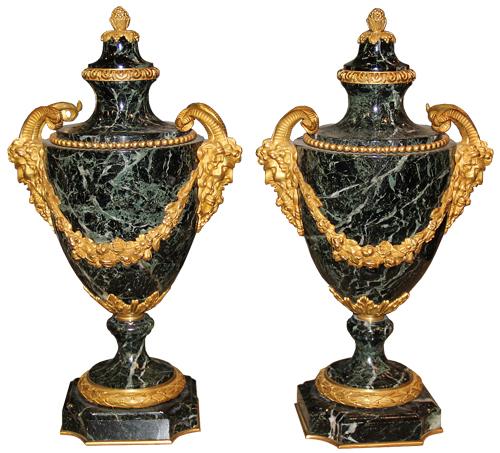 A Pair of 19th Century French Issori Verdi Marble Urns with gold ormolu finials at the top and mounted with conforming ormolu appliqués of Pan, the Greek god of nature, shepherds and flocks, draped in swags and with additional ormolu bands embellishing the shaped plinth bases 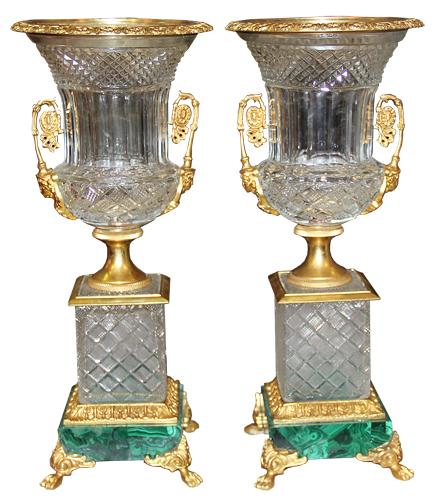 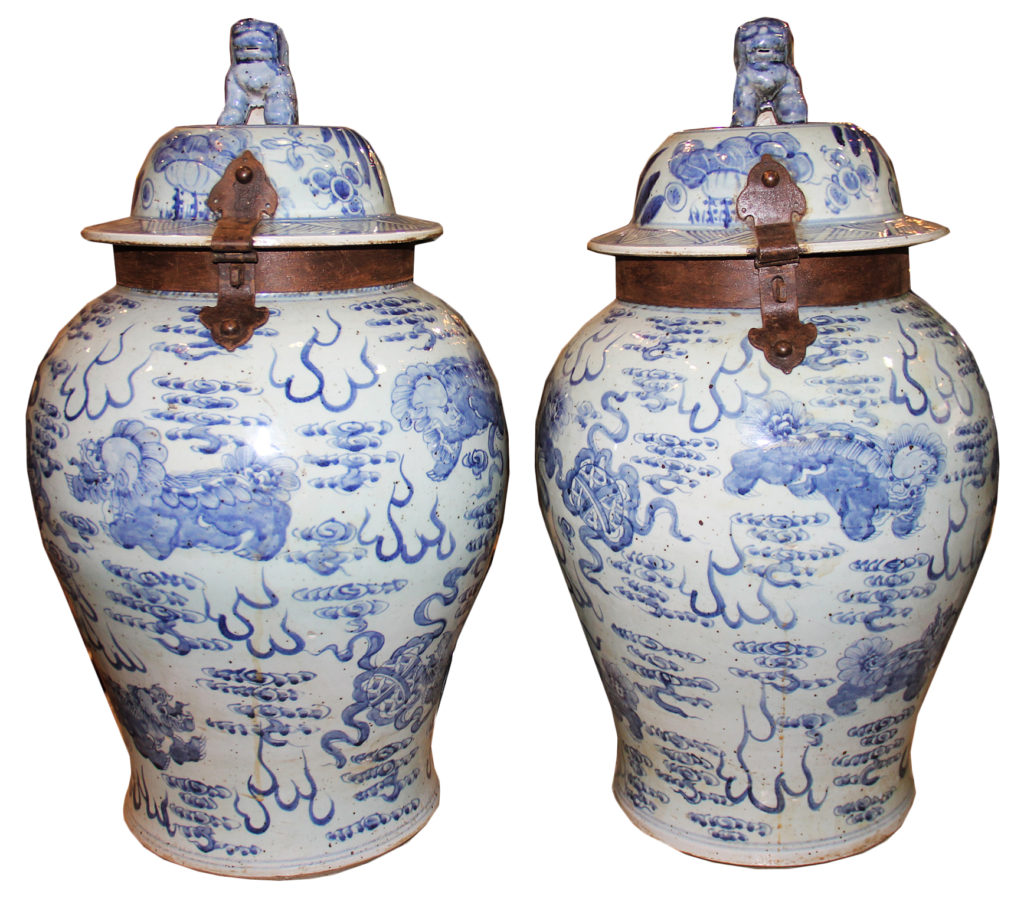 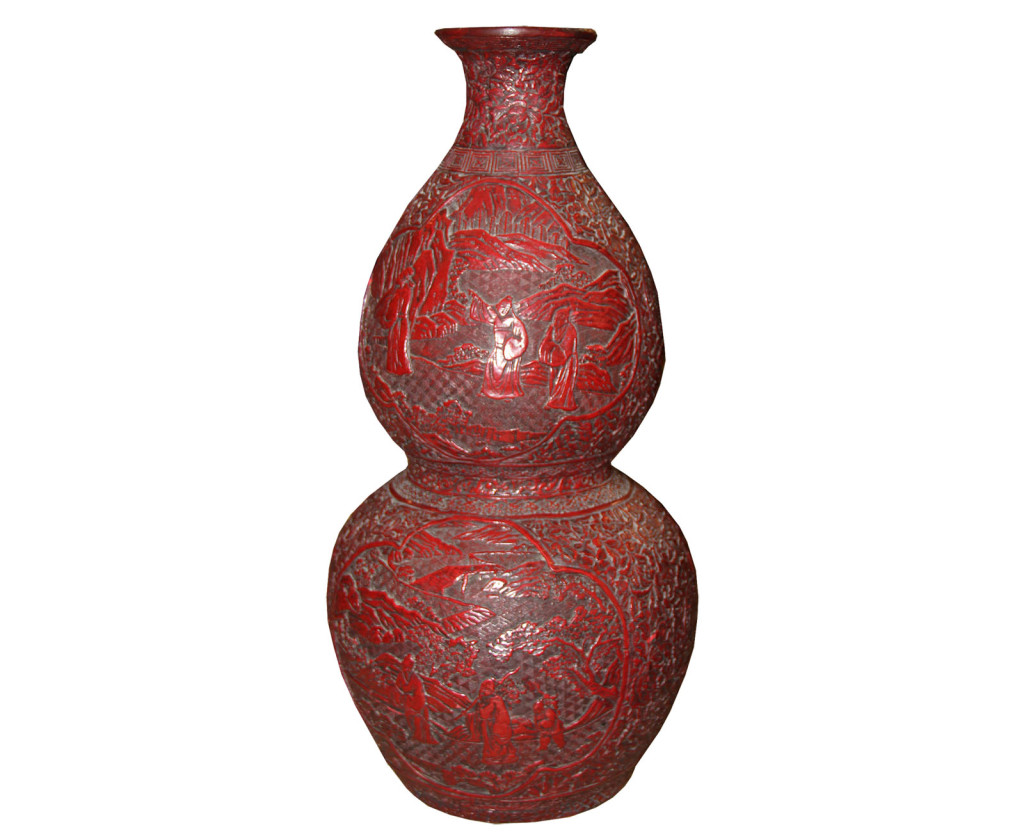 A 19th Century Chinese Polychrome and Wooden Carved Wu Lou or Hulu Gourd, a symbol of longevity, happiness, luck and health, the Wu Lou is a gourd fruit, once the fruit was removed and the gourd dried, it was used to store water or medicines to assist people in their journeys, it is thought to represent a giver of life and remover of negative energy or chi, the shape of the Wu Lou symbolizes the earth (bottom half) and heavens (top half) coming together 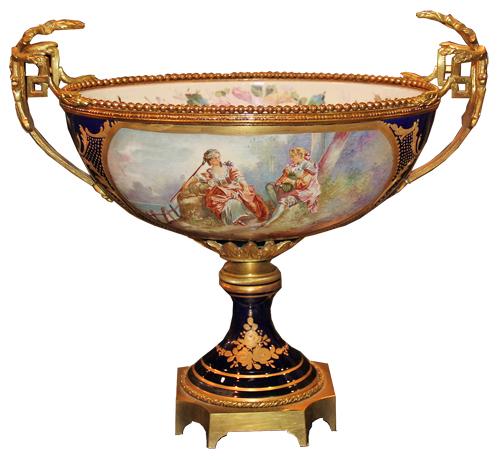 A 19th Century French Hand-Painted and Signed Sèvres Porcelain and Ormolu Centerpiece or Fruit Bowl, trimmed and raised on brass doré mounts and painted with roses and other flowers on the interior and featuring a bucolic landscape and a fête galante on the exterior 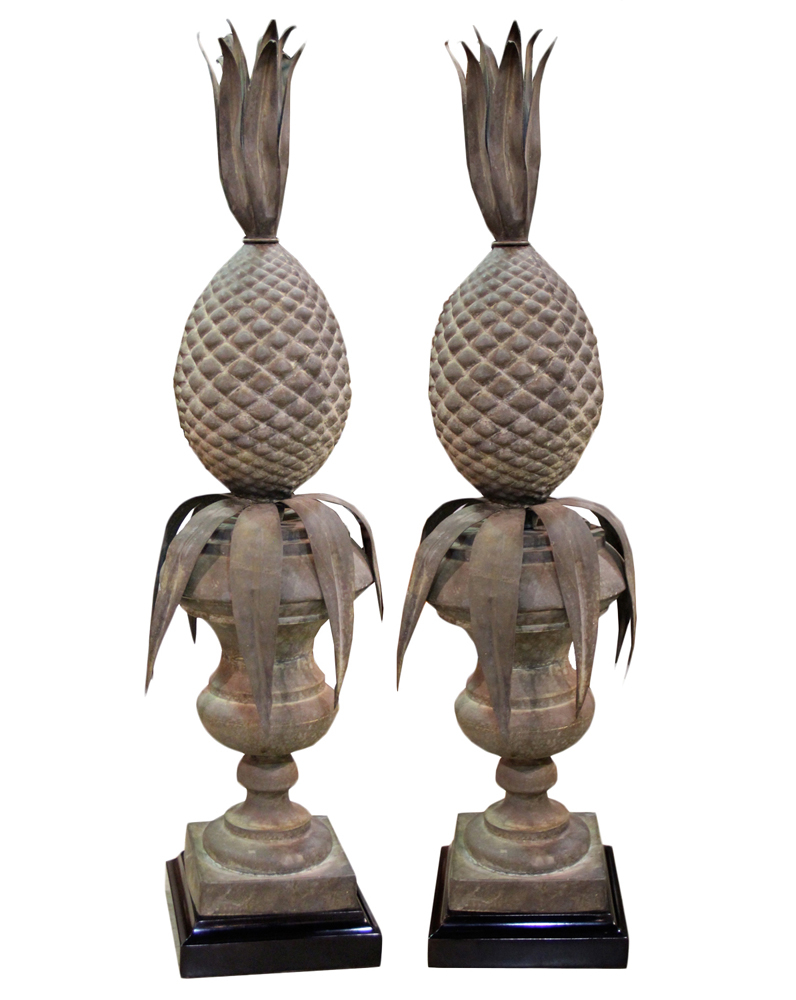 A Pair of 19th Century Italian Patinated Brass Pineapple Finials, each raised on an ebonized wood base, in Europe the pineapple symbolizing wealth, luck, excellent fortune, and most commonly, warm hospitality 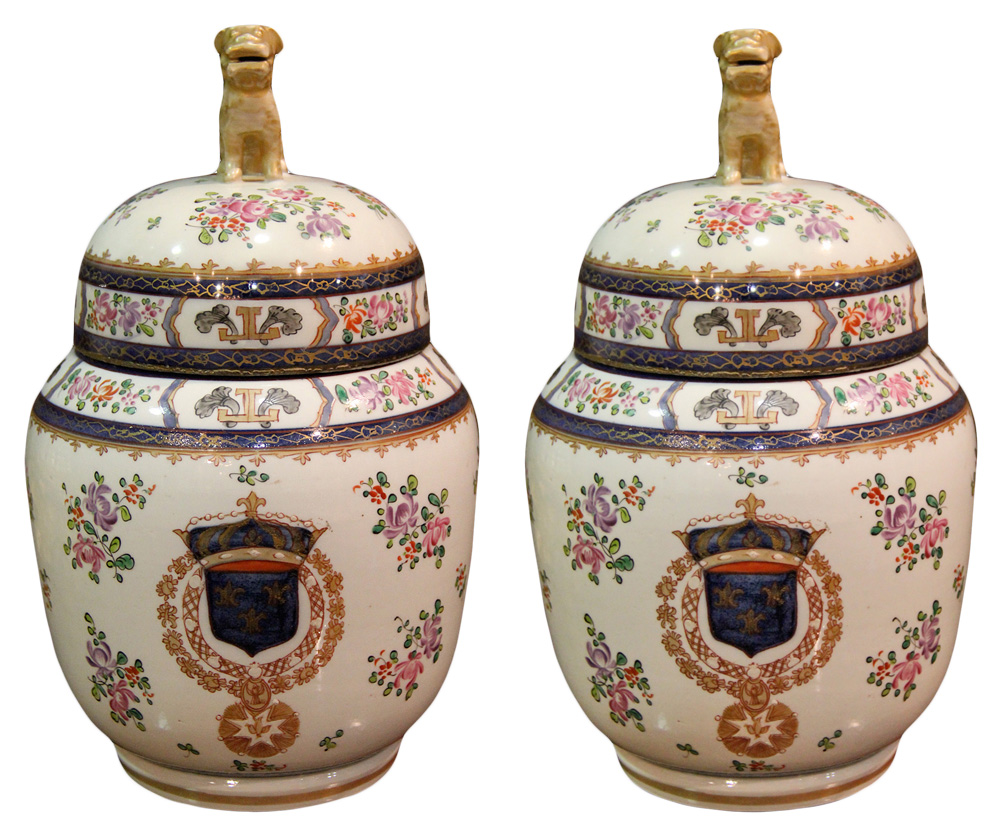 A Pair of 19th Century Chinese Export Hand Painted Porcelain Jars, centered by the royal blue coat of arms (representing the English client who commissioned them), with three fleur-de-lys below a crown and accented with floral motifs, the lids topped with foo dogs, traditional symbols of protection 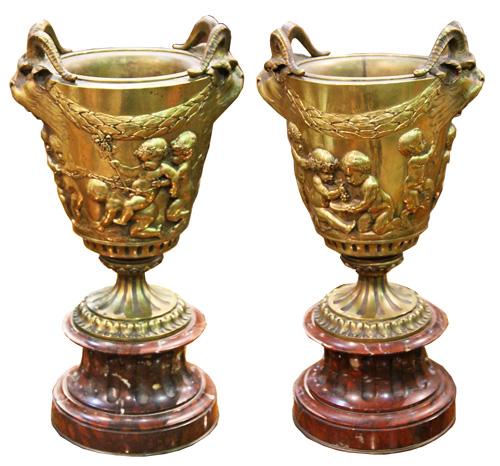 A Pair of 19th Century Italian Brass Ceremonial Cups flanked with masques of the nature god Pan and scenes of putti and panisci, Pan’s forest imps with hooved feet known for creating panic and distraction in the minds of men, the panisci play mischievously with handfuls of grapes, a reference to Pan’s companion Dionysus with the pair raised on Rouge Royale marble plinths 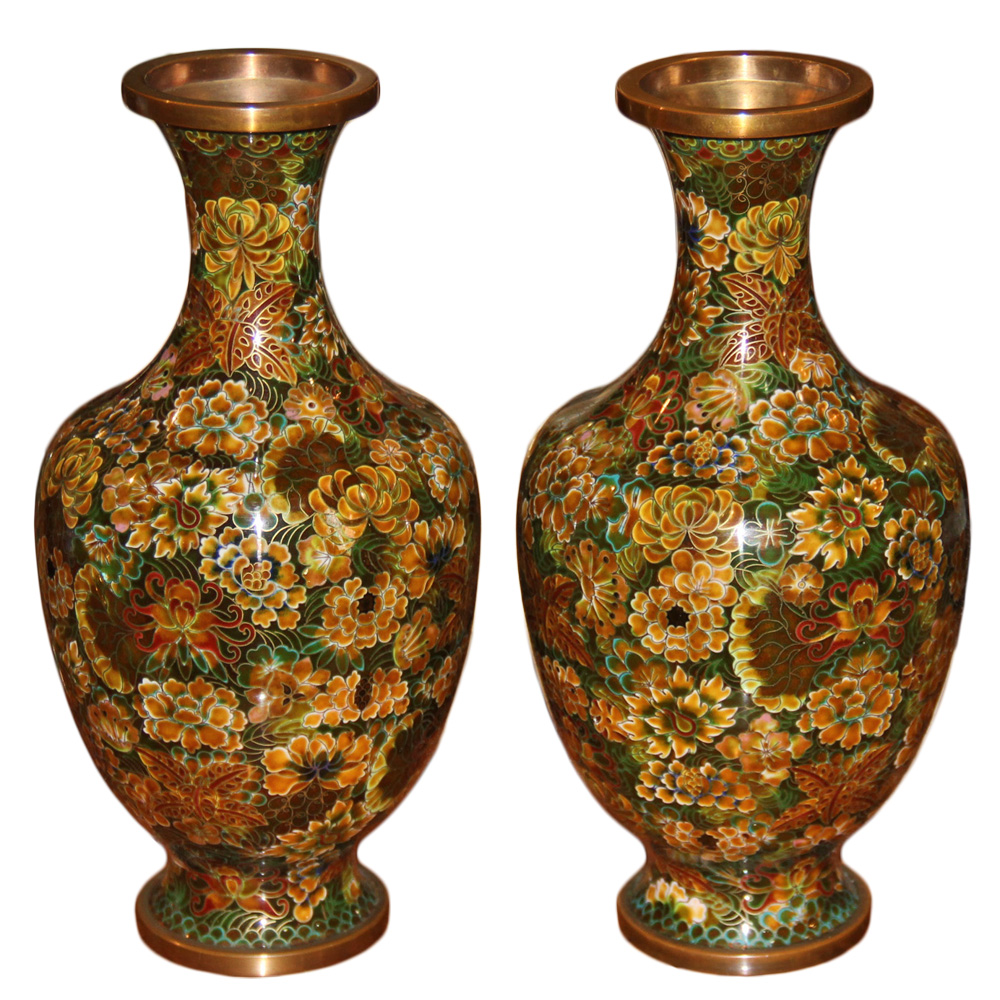 A Pair of Vintage Chinese Enamel and Copper Cloisonné Vases with floral and foliate motifs in greens, yellows, reds, oranges and with hints of blue. The cloisonné technique spread to China in the 14th century and became extremely popular in the 18th century 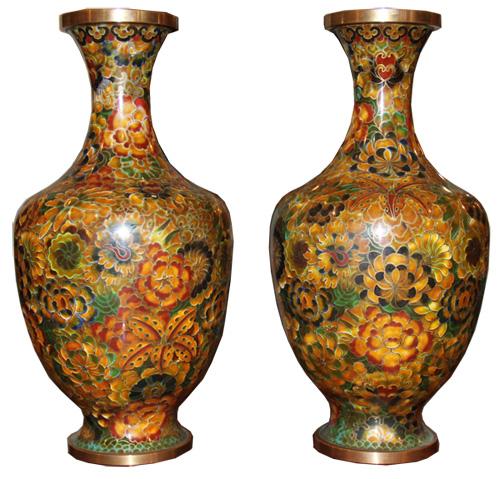 A Pair of Vintage Chinese Enamel and Copper Cloisonné Vases with floral geometric motifs in blues, greens, yellows, reds and oranges. The cloisonné technique spread to China in the 14th century and became extremely popular in the 18th century

A 19th Century French Hand-Painted Porcelain Urn in the Sevre style, with gold and white accents, the front featuring a painted scene of a young man approaching a sleeping woman and the back with a duo in draped blue, yellow and red cloth playing the violin and the harp, signed C. Heer 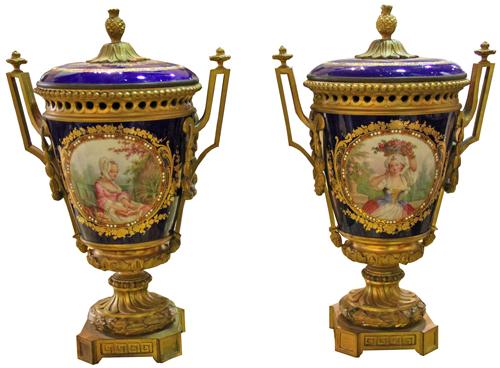 A Pair of 19th century French Porcelain and Ormolu Urns, in the Sevre style, with gilt bronze accents and depictions of fruit, flowers and women highlighted by borders of gold, white, green, and red, the base decorated with a greek key pattern 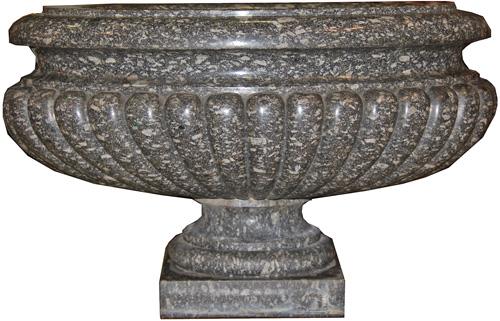 A Grandly Scaled 19th century Italian Breccia Marble Jardinière, oval in shape and carved with gadroon motifs, with the bowl raised on a simple socle base 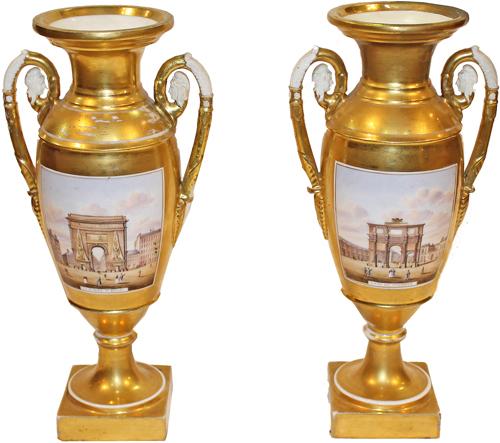 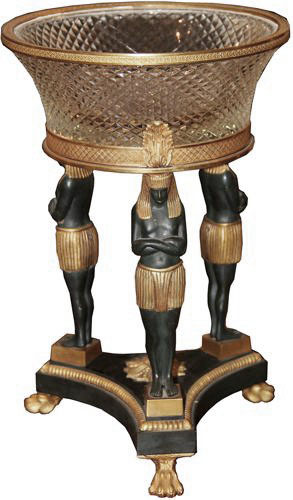 A 19th Century Austrian Empire Style Brilliant Geometric Cut Crystal Cachepot, raised on three Egyptian caryatids on a tripartite base and with the whole accented with gilt ormolu 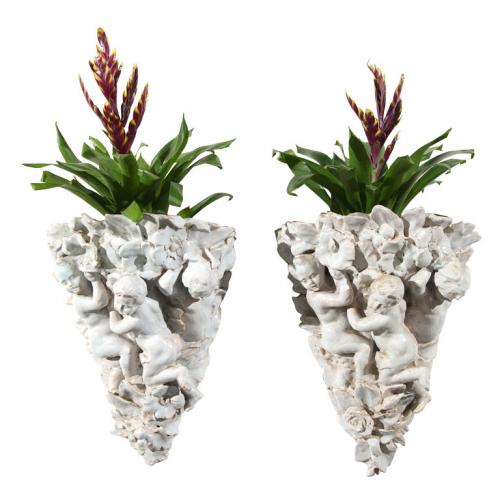 © 2022 C. Mariani Antiques, Restoration & Custom
Any reproduction, copy, or duplication of this design is prohibited