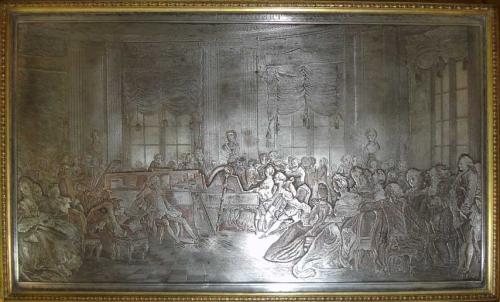 A Large Late 18th Century French Niello Valuables Box inscribed “D’Apres Saint Albin”, depicting the account of the Royal Court of Louis XV by the Comtesse de Genlis, Stephanie-Felicite Du Crest Saint-Aubin, the educator and memoir writer of the upper classes in the late 18th c. and early 19th c., most famous for her quote “Familiarity is the most destructive of all iconoclasts”. Niello is an etching used in decorating in black on silver and copper (and sometimes gold) that is somewhat related to champlevé work except that the effect is metallic rather than vitreous. Here the design of a court recital is engraved in exquisite detail into the fused copper and silver plates, the indented portions originally filled with a black matte alloy and became fused in the grooves creating the contrasting design